Prevalent throughout Asia, “Tugging rituals and games” have been recognized by UNESCO as intangible cultural heritage after a joint proposal from South Korea, the Philippines, Vietnam, and Cambodia. Tug-of-war rituals have long been practiced in villages throughout Okinawa from July to October and each area has its own distinct rituals and practices. The “Naha Great Tug-of war” is the biggest of all – actually one of the world’s biggest tug-of-war – with nearly 300 000 attendees each year. It is said to have originated in the 1450’s from a custom in which 4 fishing villages engaged in tug-of-war to pray for good harvest and to ward off evil. Highly entertaining and attracting many spectators and participants, the tradition continued after the establishment of Naha City in 1921, until 1935.

Revived in 1971 to commemorate the 50th anniversary of the founding of Naha City, it was held on October 10th (the day of the 10/10 Naha air raid in 1944, which left Naha in ruins), to promote peace. This year, it will be held from October 12 to 14 and will include various festivities throughout the city. The Tug-of-war itself will take place on the second day (Sunday).

Highlights of the festival

On the first day of the festival, over 50 groups put on an assortment of performances in the Traditional Folk Arts Parade on Kokusai-dori Street.

nahamaturi_12On the second day is the hatagashira (banner) procession, in which 14 youth organizations parade through Kokusai-dori Street proudly bearing their banners. Each of the 7-10-meter, 40-60-kilogram banners is uniquely crafted and decorated.
Around 30 nīsētā (young people) take turns carrying the flag, putting on a dynamic show. It was originally performed to entertain Chinese envoys during the times of the Ryukyuan Kingdom. The procession begins at Kokusai-dori Street and continues towards the Kumoji Intersection on Route 58, where the tug-of-war is held.

With the expansion of Naha City, the number of participating localities has risen to 14. To this day Naha is divided into East and West-the East team tugs the male rope, while the West team tugs the female one. An intense battle unfolds each year, with the nīsētā of each village donning traditional garb and standing on the rope to lead the participants. The rope itself is huge- and even gained Guinness recognition in 1995 as the “World’s largest straw rope“ and yet again in 1997 with an even bigger rope. 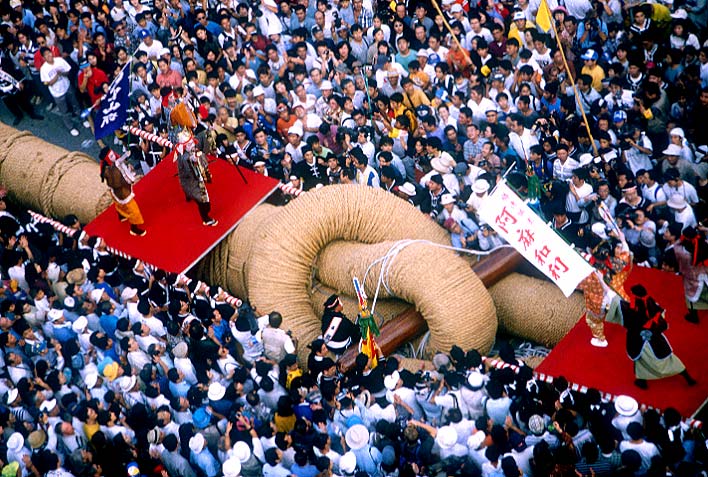 Before the tug-of-war begins, representative villages from each team wave their banner in a battle called the “chura-hata gāē”. The male and female ropes are then joined by the kanuchibō (a huge wooden rod), and a battle between historical figures is re-enacted atop the rope. The game starts with the splitting of a ball containing confetti.

The participants pull on the smaller hand ropes attached to the main rope. Participation is open not only to locals, but to visitors, as well. The goal is to pull the kanuchibō connecting the two ropes over 5 meters either East or West. However, if it does not reach the 5 meter mark after 30 minutes, the team that moved it at least 3 meters will be declared the winner. If neither team is able to move the rope 3 meters or more, a tie is declared.
After the tug-of-war ends, staff members will cut apart the hand ropes and distribute them to participants to take home. The tug-of-war rope is believed to bring safety to the home and prosperity to businesses. You can put up for decoration or protection, or even give away as souvenirs.

During all 3 days of the festival, head down to Onoyama Park for the RBC Citizens’ Festival and its multitude of booths, live performances, sports events, and even a karaoke contest. Each day will end with a bang- that is, fireworks, which are set off at 20:00 every night of the festival.

During the festival, the following places in Naha City will be subject to traffic restrictions.
Thank you for your understanding and cooperation.

NOTICE FROM THE PLANNING COMMITTEE

Limited parking near the venue. Please use public transportation (monorail, bus) or taxi.

Tips to enjoy the festival: