With an international airport and a port that connects the surrounding islands, Naha is for many people the place where their Okinawan vacation starts. Most people head first for Kokusai street with its many restaurants and souvenir shops, or Shuri – once the capital of the Ryukyu Kingdom – with its Castle, stone-paved streets, red-tiled roofs and other sights from the past.
On May 20, 2021, Naha , the political, economic and cultural centre of Okinawa, will celebrate the 100th anniversary of its establishment as a city. A number of events are being held to commemorate the city’s history, and to think about a bright future that may lie ahead.
In this article, we would like to introduce the history of Naha City and how it came to be.

The trade capital of the Ryukyu Kingdom

Naha originally started out as a small group of villages on an island between the Asato and Naha (now Kokuba) rivers. The villages began to develop when King Sho Kinfuku had a dig built between the island and the coast near Sogenji temple.
The area prospered thanks to its proximity to the royal capital, Shuri, and soon four different villages – Nishi, Higashi, Wakasa and Izumisaki – came to be known collectively as the “four markets of Naha”. During the Ryukyu Kingdom period, Naha thrived as a trade hub, especially with nearby China and other East and South East Asian countries. 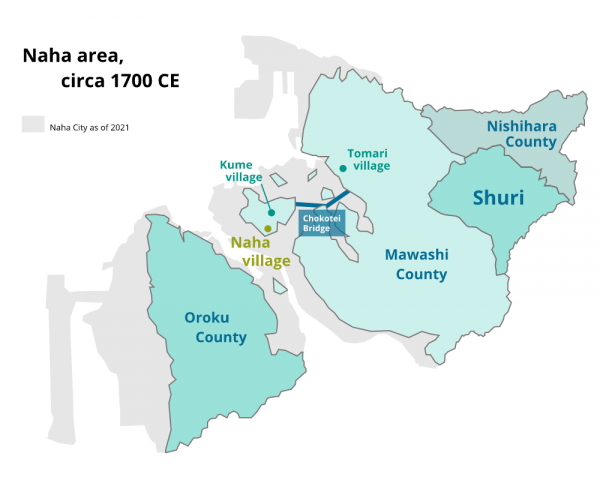 The capital of Okinawa Prefecture

By the 19th century, western ships were also stopping at Naha wharf, at a time when Japanese ports were still closed to foreigners. In 1853, Commodore Matthew Perry stopped in Naha on his way to Japan.

In 1879, the Ryukyu Kingdom was officially abolished, and became part of Japan as Okinawa Prefecture. The following year, the new prefectural government was established in Nishi, the most populous town in the area, which quickly replaced Shuri as the center of the prefecture’s economical and political life.
In 1896 was created the Naha Disctrict, which included the four villages, plus the neighbouring Kume and Tomari villages (Shuri was still a district of its own). Naha grew up to include nearby villages and towns, and on May 20., 1921, Naha officially became a city.

Naha after the war

The new prefectural capital was however almost entirely destroyed by US bombs on Octobe 10, 1944, before the Battle of Okinawa had even begun. All the historical cityscape and landmarks burned to the ground.
Immediately after the war, most of Naha was occupied by the US military and closed to civilians. Reconstruction started on the city’s outskirts, around Tsuboya district (near today’s Kokusai Street), which had miraculously sustained very little damage during the war.
The newly created Ryukyu civil government and other public agencies moved to Naha and on December 9th, 1949, Major General Joseph R. Sheets declared Naha capital of Okinawa.
People were progressively allowed to move back into Naha’s old neighbourhoods again, and the city quickly regained its former liveliness. 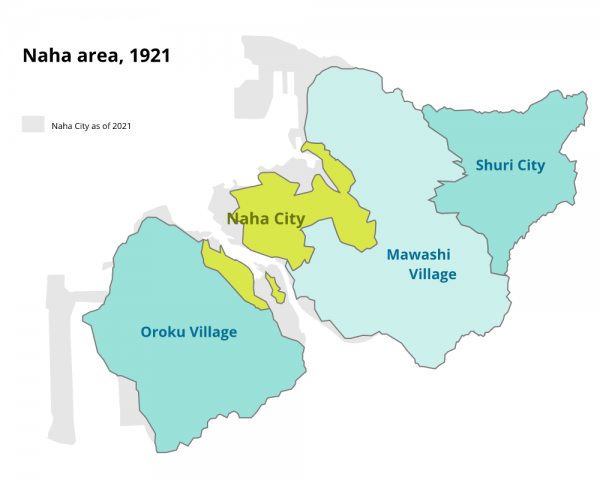 On May 15, 1972, Okinawa was reversed to Japan. Naha City was made the prefectural capital of the new Okinawa Prefecture. Its current population is 320,000 and is about 40km² (about 15mi²) large, and is a very pleasant place to live.