Just as Japan has kimonos, Okinawa has a number of traditional outfits. There are facilities all over Okinawa where you can casually try on a colorful Okinawan style kimono, take photos, and take a walk around the area.
Let’s take a look at traditional costume of Okinawa.

The traditional Ryukyuan outfit is called “Uchinā sugai” in Okinawan dialect. Uchinā” means “Okinawa,” and “sugai” means “dress, appearance, or attire”.
During the time of the Ryukyu Kingdom, a unique style of kimonos developed, influenced by both Chinese and Japanese traditional clothing. While still somewhat close to mainland Japan, Okinawan kimonos differ in appearance, colors, patterns, materials, and how they are worn. Also, with the establishment of the a rigid caste system (royal family, general nobility, and commoners) around the 16th century, colors, patterns, and types of cloth were codified according to social status and gender.

What's so special about Okinawan kimonos?

One of the characteristics of Ryukyuan kimonos is that the sleeves are wide open, with the lining showing through the openings: a lot of consideration goes into matching the colors of the different layers.
Materials and fabrics are also picked to suit the Okinawan climate.

Kimonos of the nobility

Noblemen’s costume looks rather similar to a Japanese kimono. Men wore a large obi around the waist, tied in a complicated knot in front.
The color of the hat, called “Hachimachi,” depends on the status.

Unlike Japanese kimono, women don’t wear a tight obi (sash). They only wear a thin belt, that they hide in a fold of their kimono. This style called “ushinchi” is a clever way to let some air through and keep cool in the hot climate. Materials and fabrics are also picked to suit the Okinawan climate.

Okinawa also has many kinds of traditional textiles from which to make kimonos. If dyed bingata are well known for their bright colors, weavers from each island have come up with their own techniques and patterns – Shuri-ori, Kumejima Tsumugi, Jōfu from Yaeyama and Miyako, Bashōfu, Yonaguni-ori – many of which are listed as Important Traditional Crafts of Japan.

The traditional Ryukyuan hairstyle is called karaji or kanpu.
It requires waist-length hair that is tied up in a bun, and hold together by a jīfā, a long silver hairpin. While it is now very rare for a man to wear the traditional kanpu, it is still fairly common for women when wearing an Okinawan style kimono: they usually rely on special hairpieces to make up for their shorter hair.

Want to try an Okinawan kimono?

Thanks to Oguri Kimono Salon in Naha City, we had a chance to actually try on the traditional outfit of Ryukyuan nobility. 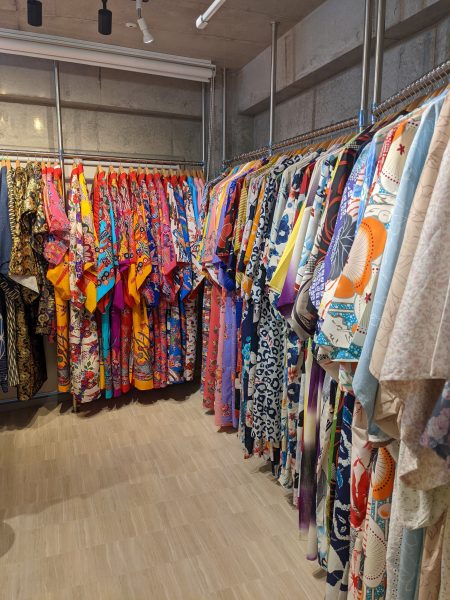 As we entered the store, we were welcomed by a huge selection of kimonos.

There are so many different types that it took us a good ten minutes to choose. There are not only Ryukyuan kimonos, but also many Japanese ones as well.

Looking forward to seeing how it will turn out.
Thanks to the experienced staff, it only takes about 10 minutes get dressed.

Pictures time! What do you think?
Depending on the plan you choose, you can even take a stroll downtown in your kimono.

Even for Okinawan, wearing a traditional kimono can feel like a special occasion, and it did for us as well! There are many patterns and colors to try on, and it’s worth taking a few minutes to find the one you like the most. It also makes for great pictures to take back home!