Just 5 minutes from what is now Kokusai Street, Tsuboya was at the heart of the pottery industry during the times of the Ryukyu Kingdom. Shops selling the Tsuboya-style wares – and studios crafting them – still line up Yachimun-dori Street, the main road.
Tsuboya is also one of the best place in Naha to get a glimpse of prewar Naha, the area having miraculously escaped the destruction of the city during WW2.

In Okinawa, pottery making took off in the early 17th century, when a crown prince invited Korean masters from Satsuma (Kyushu) to teach their craft to Ryukyuan potters, in the hopes of starting a new industry in the islands.
In 1682, King Sho Tei founded the village of Tsuboya as part of the centralization of pottery making : workshops, kilns and craftsmen from three villages were relocated to what was at the time a hill nearby Makishi village. The new site had abundant clay and water, and also many slopes to build kilns on. It was also conveniently located, halfway between the capital Shuri and the port of Naha.

Along the centuries, Tsuboya potters developped their own style and motifs, experimenting with the local clay and importing many techniques from all over Asia.

-
Unglazed wares (or sometimes with a mud or manganese enamel) are called "arayachi". They are mostly brown with a reddish tint thanks to the iron-rich Okinawan clay. They are usually meant for storage, such as water and sake jars, as well as funerary urns.

-
The more refined "jōyachi" are glazed and usually fired at higher temperatures. They are much more varied in colors and are mostly smaller and more elegant wares made for the table : tea and awamori sets, plates and bowls ...

Five Spots to check out in Tsuboya

Come here to learn everything there is to know about Tsuboya, from the district's history to the techniques of pottery making. The museum's extensive collections include many masterpieces from "Living National Treasures", video archives, and even the Nishi nu kama, a historical kiln that was discovered during the construction of the building.

Originally one of many, the "southern kiln" is today the only surviving "arayachi" (unglazed potteries) kiln in Tsuboya, complete with its tiled roof : it is said to have been built in 1682 as a present from the King to the newly created Tsuboya village. This single chamber kiln was mostly used to fire larger wares, such as water and sake jars, and funerary urns. It remained in use for almost three centuries, until the '70s.

This alley has changed very little since the times of the Ryukyu Kingdom. A must for amateur photographers !

Sitting atop a wall at the intersection is a rare example of a "shisa" (guardian lion) head carved in stone. Shisa are usually placed in pairs on rooftops, or on each side of a gate. They are said to keep the good spirits inside the house and ward off the evil ones.

Residence of the Arakaki family

This 1300m² Okinawan-style potter's house is remarkably well preserved, and is the only one that still includes a workshop and a kiln. The "east kiln" (Agari nu kama) is a 9-chamber climbing kiln that was used to fire jōyachi wares. It was used collectively, and many masters learned their craft on it, including Kinjō Jirō, Okinawa's first "Living National Treasure".
The workshop closed its door in 1974, but the estate was recently restored and is now open to the public.

The "East well" was the first one to be dug in Tsuboya, and still provides water when the pump is operated.
Next to it is an incense burner, as the place is still used by locals as a place or worship. 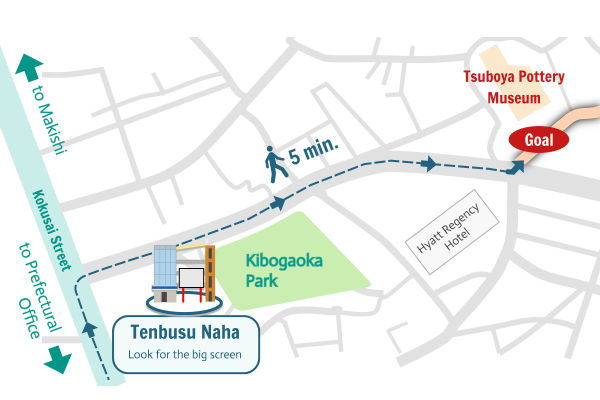 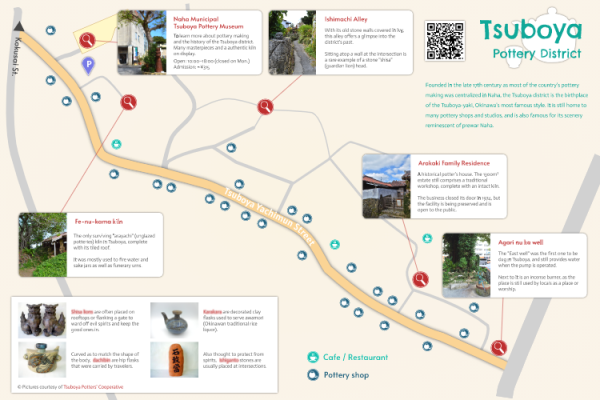