Alert: A fire broke out at Shurijo Castle on October 31st, burning much of the castle. Access is currently restricted, and the condition of the castle has yet to be determined. For more information, click here.

When most people think of tourism in Okinawa, they are drawn to Shurijo Castle as a must-see. Since it was registered as a World Heritage site on December 2nd, 2000, its appeal has only grown.

Shurijo Castle’s Seiden (main hall) was constructed during the 1700s, and was regarded as a national treasure. However, during the Battle of Okinawa, the area was assaulted by the American military and the castle was shelled and burned. In 1992, the Seiden was restored using remains that had been salvaged.

Getting around Shurijo Castle Park

Shurijo is a large National park, at the center of the which lies the Seiden. While the Seiden is a paid admission area, the park also boasts areas that are free to the public. It is situated at the highest elevation within Naha city, and possesses breathtaking views. In addition to the Seiden, visitors can enjoy the majesty of the Shureimon Gate, the Sonohyan-Utaki Stone Gate, and the Kankaimon Gate, all of which received recognition as cultural and historical treasures as part of the Gusuku sites and related areas of the Ryukyu Kingdom.

As you climb the gentle slope up to Shuri Castle, the first sight to greet you will be Shureimon Gate, constructed during the reign of King Sho Sei (1527-1555).
Shurei means “observe the proprieties” and the characters that hang above the gate 守禮之邦 (read as “shurei no kuni“), mean “the land of propriety”.
Shureimon Gate was damaged by fire during the Battle of Okinawa, but it was restored in 1958.
In 1972, the Okinawa Prefecture designated it as a piece of cultural heritage. It soon became famous, and is pictured on the ￥2000 note.

After passing through Shureimon Gate, you will be able to see Kankaimon Gate. The name “Kankai” means to welcome, and was named such in honor of the envoys that were hosted in Shurijo Castle sent from China during the Ryukyu Dynasty period.
Just like many of the other structures in the park, it too was damaged and burned during the Battle of Okinawa, and it was not restored until 1974.

The Seiden is a paid admission area.
The gate opens up into a large courtyard called “Una”.
This is also where various events are held throughout the year.

Shurijo was once surrounded by temples and palaces for the royal family and their vassals. A representative reminder of these, Enkaku-ji Temple, lies near the north side of the castle.
Designated as a national treasure in 1933, all but the bridge was destroyed during the Battle of Okinawa.
It took until 1968 before the Somon Gate, Ishigaki, and Hojochi Pond within the temple grounds were restored.
A little known fact is that the bridge over the pond has remained unchanged for hundreds of years, and is considered a national treasure by the Japanese government. 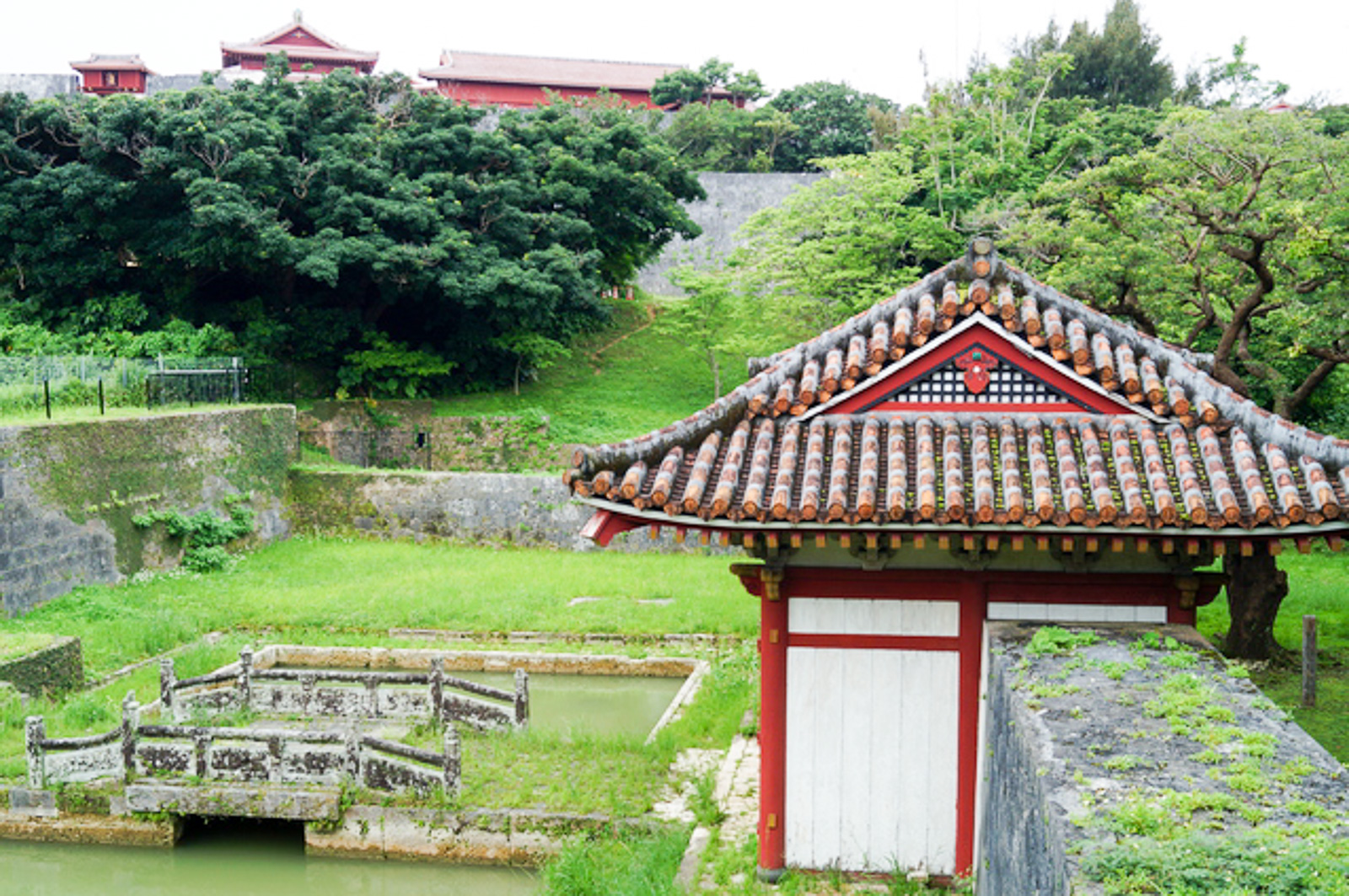 In 1427, an artificial pond was built by a government official, after he returned from China where he studied landscaping and gardening. Near it stood the oldest stone tablet in Okinawa (currently on display at the Okinawa Prefectural Museum), which immortalized the concept of peace and serenity.

This is only a small taste of what Shurijo Castle Park has to offer.
Within the park, there are still many more fascinating places to discover.
If you’re traveling to Okinawa, please stop by and step back in time to discover the Ryukyu Kingdom for yourself!