Sitting on top of a hill overlooking Naha City, Shurijo Castle is by far the most famous historical site in Okinawa. The seat of the Ryukyu Kingdom’s government from 1429 to 1879, it burned down during the Battle of Okinawa at the end of WW2. Beginning in 1992, the central citadel and the Ryukyu limestone walls were rebuilt based on historical records. The castle quickly became a symbol of Okinawan culture and history, and a hugely popular visit thanks to its iconic colour and for its unique, Chinese-influenced architecture.

Sadly, the inner courtyard was struck again by a devastating fire in the early morning of October 31, 2019: six buildings, including the main, north and south halls were completely destroyed. The Japanese government and Okinawa Prefecture have vowed to rebuild it, and efforts to restore the damaged sections have already started.

The inner courtyard has recently reopened its door to the public, just as travel restrictions are being gradually lifted. We took the opportunity to take a tour of the castle with a guide, to give you a few ideas of what to check out on your next visit. 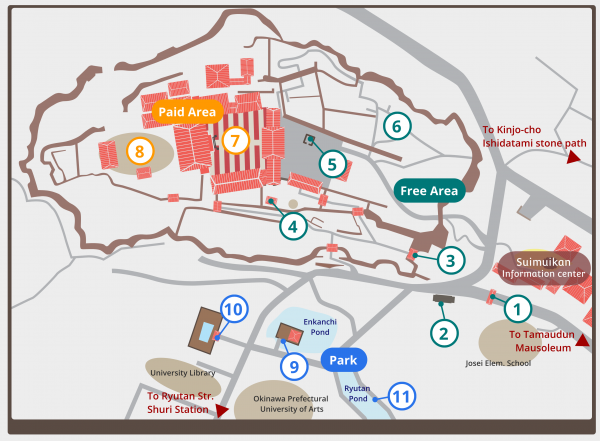 Built in the first half of the 16th century, the ① Shureimon (picture below), “Gate of Propriety” leads to the main entrance to the castle, a few hundred metres on. Its name comes from the four Chinese characters framed on the gate: “Shurei no kuni”, meaning “The land of propriety”. Like most gates in the castle, only the King and dignitaries were allowed to use the central bay.

Just after this first gate is the ② Sonohyan-utaki Stone Gate, but this one doesn’t lead to the castle. Behind the door is the Sonohyan-utaki, a sacred spot of national importance where the King used to pray every time he left the castle. It is named after the name of the divinity worshipped on Iheya Island, the birthplace of the first Shō dynasty, who unified the Okinawa islands at the start of the 15th century. It was built by Nishito, a Taketomi Island-born stonemason who served at the King’s court in the early 16th century.

The road will then take you to the castle itself, first through the ③ Kankaimon, the front gate of the castle. The name is a literal Japanese translation of the original Okinawan name meaning “to welcome with a smile”, referring to the welcoming of foreign embassies, and especially the “sappūshi” sent by the Chinese Emperor to invest each new king.

Just after the gate, stairs will take you through a second wall to an upper courtyard, where hangs a real-size replica of ④ the “Bridge of Nations” Bell (picture below). This 1.5-metre-high bronze bell originally hung in the main hall. Its name derives from an inscription upon it celebrating the Kingdom’s history of trade with China and Japan.

Through the next gate is another of the 10 historical sacred sites that could be found within the castle. The ⑤ Suimui-utaki (picture above) was especially important to the religion of the Kingdom: it is said to have been created by Amamikiyo, the god who made the Ryukyu Islands. On its left is the gate to the central citadel and inner courtyard (an admission fee is required after that point).

The right path leads to the ⑥ Kyō no uchi (picture above), a sacred grove where the High priestess of the Kingdom used to perform rituals. The sight from the top of the outer wall is also definitely worth the short hike.

The inner courtyard and private area

The innermost courtyard or ⑦ Unā (picture below) was at the centre of the Kingdom’s political and cultural life. It was boarded by the main hall (Seiden) facing east, and the Hokuden and Nanden halls, respectively on the north and south of the courtyard – all of which were destroyed by a fire (likely caused by an electrical fault) in the early morning of October 31, 2019. It was actually the fifth time that the castle has burned down following previous incidents in 1453, 1660, 1709 and 1945. Okinawa Governor Denny Tamaki, as well as the Japanese government have vowed to rebuild it, with the UNESCO offering to help. The rebuilding has just started and is expected to be completed by 2026.

Luckily, many historical objects belonging to the Royal family, including the crown, were not at the castle at the time of the fire, being in the collection of the Prefectural Museum of Art. Currently, part of the foundations (picture below) of the main hall are visible. Some of the ornaments that were saved are on display in the courtyard.

Beyond where the main hall stood is the ⑧ Uuchibaru (picture above), a private area that only the Royal family and their female servants could access. The servants had their own side gate ( Shukujun-mon), living quarters (Nyokan-kyoshitsu) and bathhouse, on the left side of the Uuchibaru. On the right side of the courtyard are the kitchen, and the King’s and the Queen’s rooms. In the centre is the Yohokoriden, where succession rituals where performed at the king’s death.

On your way back to the city is the ⑨ Benzaiten-dō, a small pavilion originally built in the 16th century on the Enkanchi Pond to house precious Buddhist scriptures presented to King Shō Toku by King Yi Yu of Korean. This unpretentious temple is very popular for its peaceful atmosphere.

Just across from it is the site of the ⑩ Enkaku-ji temple, the royal family’s official Buddhist temple. Once the most impressive temple of the Ryukyu Islands, it was entirely destroyed in 1945. A courtyard, three gates and the Hōjō-kyō stone bridge were rebuilt in 1967-1968, but other parts couldn’t be restored due to a lack of historical records. Most of the temple grounds are still preserved, possibly for further reconstruction.

If you like the serenity of the temples, you might also enjoy some quiet time strolling around the ⑪ Ryūtan Pond. There is plenty of shade, and an abundance of wildlife in and about the water: koi fish, turtles, ducks… The castle and its surrounding are also partly illuminated from the sunset to midnight. The pond area is ideal for a romantic night walk, or to get some fantastic pictures of the castle.