What Okinawan dishes have you heard of while planning for your trip? Bitter melon stir-fry? Ishigaki beef? Maybe Taco rice?

In addition to the stir-fries and other popular dishes typically found at every good Okinawan izakaya (tapas bar), there is a tradition of sophisticated court cuisine, as it was served during state banquets. While most of the food eaten nowadays in Okinawan households was heavily influenced by the introduction of American food after WW2 (SPAM, tacos…), traditional Ryukyuan cuisine dates back to the times of the Ryukyu Kingdom (15th to 19th century) and favors local ingredients, using boiled pork belly instead of SPAM.

This traditional food culture has been recognized by the Japanese governement as an “important historical asset” in 2019, along with Okinawan performing arts and awamori (rice liquor).

Let’s take a look at some of the culinary secrets that have been said to be the source of Okinawa longevity.

The culinary techniques and recipes passed down by the Ryukyuan nobility have been first developped for the enjoyment of the residing Chinese and Japanese emissaries.
With the dissolution of the Kingdom in 1879, many of those recipes made their way to the commoners’ table, while picking up features of the lower classes’ homemade cooking.

There are also dishes that are made at home for specific rituals – often related to the veneration of the ancestors – that occur throughout the year, many of which originated in China.

The traditional cuisine of the Ryukyu Islands predominantly relies on locally grown ingredients such as tropical vegetables, pork, tofu, and seafood, but it also makes a great use of imported konbu and bamboo shoots.

Firm believers in the power of a healthy diet to prevent disease, Okinawan pay special attention to the balance between different type of ingredients. Food is boiled, fried, braised or simmered, and rarely served raw.

Pork and dried bonito (akin to skipjack tuna) are commonly made into a broth to bind together the flavours of the other ingredients.

With the inauguration of each new king came a delegation from the Chinese Emperor called sappōshi. Much of the culinary tradition of the court developped in order to entertain state guests, and was heavily influenced by China. The layout is as elaborate as the food itself, and served in gorgeous lacquered meal boxes.

The saying “everything but the oink” is certainly true here too: every part of the pork is used: chitterlings soup, boiled pigs’ feet, pigs’ ears. But the most appreciated pork dish is probably rafutē: pork belly simmered in soy sauce.

Delicious on its own, Okinawan-style shima-dōfu is also a key ingredient of stir-fry dishes.
Unpressed yushi-dōfu is another favourite with its simple flavor and creamy texture enhanced by a bonito and miso broth.
Tofu is can also be fermented with awamori and koji mold to make tōfu-yō, a treat not unlike cheese that used to be made exclusively for the nobility.
Bean tofu has also a sweet counterpart in peanut tofu, stickier and creamier, and served with a sweet soy sauce.

Seaweed:
Though not indigenous to Okinawa, the consumption of konbu seaweed in Okinawa is said to be among the highest of all Japanese prefectures. Sliced and fried with pork in the traditional kubu-irichi, it is also frequently used in many soups and broths, such as sōki-jiru (spare ribs’ soup) or Okinawa soba (noodle soup).
Local mozuku and asa seaweed are also commonly used, for instance in tempura.

Champuru (sometimes spelled champloo) are stir-fried dishes that contain tofu and vegetables. The word is said to derive from Malay campur, which means “to mix”.

Fish:
Though surrounded by the ocean, Okinawa prefecture’s fish consumption is the lowest of all Japan. The islands are nonetheless famous for tuna. Raw tuna seasoned with a miso and vinegar sauce is a local speciality, along with fried gurukun (double lined fusilier) and squid ink soup.

The main sources of carbs are traditionally noodles (in soup or sauteed) or rice, which can be served white, or cooked with ribs, hijiki seaweed, carrots, shiitake, and konjac jelly.

Celebrations: food that bring families together
Okinawan families have many things to celebrate throughout the year : Lunar New Year, Shīmī (Purification of the family grave), Obon festival (veneration of the ancestors). Besides these yearly events, relatives also gather on occasions such as weddings, and birthdays at specific ages (13, 61, 88, 97 years old). The meals they share usually include many dishes meant to bring longevity, good health, or fertility. 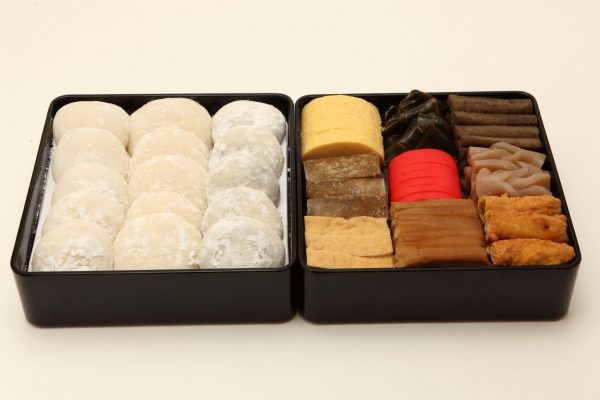 Awamori: the perfect companion
The same way that France has wine, China has Shaoxing rice wine, and Japan has nihonshu (sake), any authentic experience of Okinawan cuisine should include some awamori. This local rice liquor is usually enjoyed with ice and a dash of mineral water. It is also used in cooking, for example to make rafutē (stewed pork belly) or fermented tōfu-yō mentioned above.
Aged awamori or kūsu is especially appreciated by connoisseurs, who drink it straight in small sake cups.

As the saying goes, we eat first with our eyes.
At the king’s table, the many courses would be served in an elegant lacquered meal box called “tundabun”, to highlight the food’s sophistication.
On less formal occasions, meals are still today commonly served in hand-decorated “yachimun” pottery dishes, another typical Okinawan craft.

We hope we gave you some ideas of local specialties to try during your visit here. They might even help you live to 100 years old, as it does for so many Okinawan.

And don’t forget to say “Kwatchi sabitan!” (thank you for the delicious meal) once you’ve finished eating!